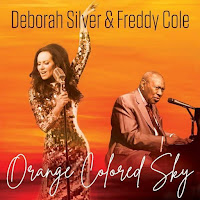 Silver wanted to honor Freddy Cole’s late brother saying, “I think Nat King Cole was a huge influence on all music. His velvety voice and debonair delivery are iconic. Also, recognizing what an admirable role he played in the civil rights movement, he always showed grace and dignity. Nat King Cole was obviously a very special man and so is his brother, Freddy.”
Equipped with a fresh Broadbent arrangement of the tune Nat King Cole recorded at Capitol Studios in 1950, Silver and Freddy Cole recorded at the famed Sunset Sound Studios. As seen in this behind-the-scenes video (https://www.youtube.com/watch?v=WYvRJMJh69I), the chemistry spawned from their endearing friendship and sweet affection seeped onto the single.
“Our recording happened quickly. Singing the song together and being in the same room right next to each other made it really special. We just clicked. We were able to respond to each other on the spot. It was like having a conversation…so much fun and truly magical. I’ve always thought Freddy Cole had the coolest voice and is the sweetest man. He has a style like no other. We have been friends for over 20 years and thought it was about time to do a duet together. It is nice when you work with people you are comfortable with. It just seemed so easy,” said Silver, who will perform with Freddy Cole at Blues Alley in Washington, DC on December 12-15 and at Birdland in New York City on December 23-28.
“It (‘Orange Colored Sky’) was a great tune and we just thought it was appropriate to use on this occasion,” said Freddy Cole who turned 88 last week. “She’s (Deborah) a fine singer. She’s a good entertainer and she knows how to pick her material. Working with professional people, they know what they’re doing. Steve (Tyrell) brought his expertise to the table. It’s good to have another voice on the project that’s different from what yours is.”
Silver’s 2016 “The Gold Standards,” also produced by Tyrell and Allen and arranged by Broadbent, debuted at No. 1 on Billboard’s Traditional Jazz Albums and Heatseekers Albums chart and No. 2 on Billboard’s Jazz Albums chart. It went Top 10 on Billboard’s Independent Albums chart and hit Billboard’s Top 200. Silver is putting the finishing touches on a jazz-country hybrid collection of selections from the Great American Songbook that she recorded with Asleep at the Wheel that is slated to drop in the first quarter of 2020. The prolific singer hints at issuing a second album next year – a full album of duets with Freddy Cole.
For more information, please visit https://www.deborahsilvermusic.com.
By Beelift Media|2019-12-05T01:35:49+00:00December 5th, 2019|Celebrity News|0 Comments